Phnom Penh is the capital city of Cambodia. It is a mixture of very poor and some "nouveau riche". A large portion of the Mekong Riverfront has been bought out by foreign investors with plans for high priced condos and trendy cafe bars. The inner city is very clean and tourist friendly, with beautiful parks and monuments. The surrounding area, however, appears very poor. The streets are lined with trash and it was not uncommon to see small children roaming the streets without clothes.

The Royal Palace mimics that of Bangkok, Thailand. It is a large complex of throne rooms, royal homes, and pagodas. Unfortunately, photography is not allowed inside any of the buildings. The courtyards and gardens are beautiful, with flowering blossom trees and lotus flowers. The throne room and coronation hall are very ornate with crystal chandeliers hanging from every beam, accenting the gold and silver decor. 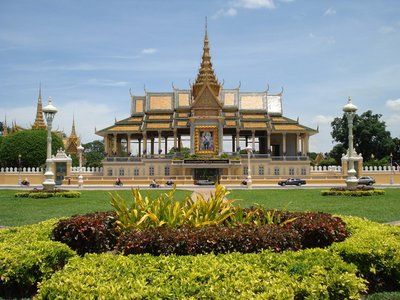 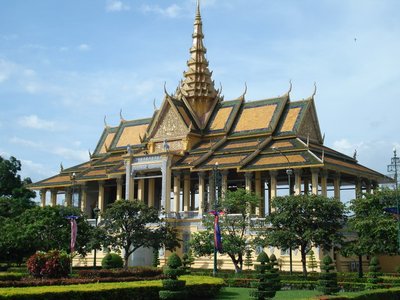 The Silver Pagoda is found within the royal complex. The floor is made of over 5,000 silver tiles which are carefully covered with carpets and rugs to prevent damage by tourists. A large bronze and silver Buddha are on display, as well as Khmer artwork and pottery. 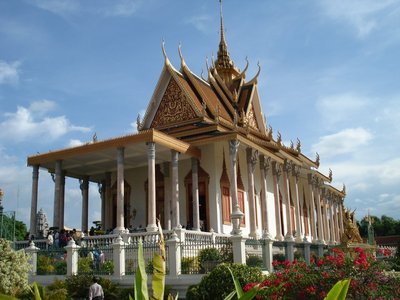 We also visited Wat Phnom, a Buddhist temple used by locals to pray for good luck and success. The entrance to the temple is a large staircase with carvings of lions and serpents. At the exit of the temple, there was a monkey sitting on a chair having lunch. Steve wanted to bring him home as a friend for Gunner. 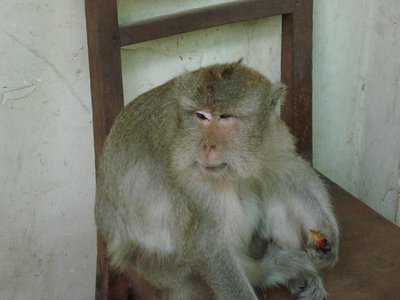 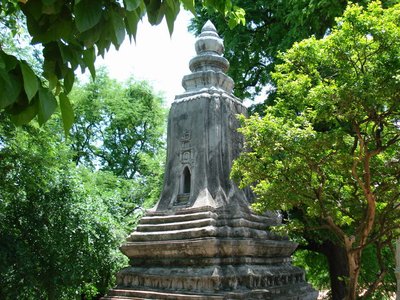 Wat Ounalom was the second stop on our tour of the city. Most of the temples appeared to be closed and we were the only visitors. However, towards the back of the complex, an elderly man gestured for us to follow him through a small temple door. We removed our shoes per Buddhist tradition and knelt down inside the small room. There was a large Buddha in the center, with surrounding lights. The elderly man gave us each an incense stick to burn and started to pray for us. He then took a small branch of twigs, dipped it in a bowl, and splashed us with water as he chanted the prayers. At the end of the impromptu ceremony, he brushed water over our hands and gestured for us to wipe the water onto our heads. It was a great honor to be invited to participate in such a ceremony. The old man didn’t speak a word of English, but he was a very gracious host. 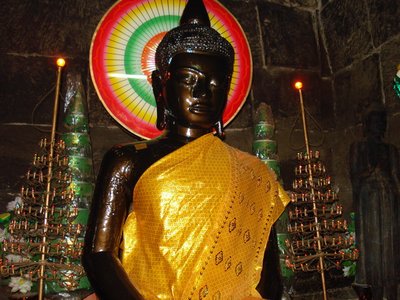 Cambodia also has a very disturbing history. We visited the S-21 Tuol Sleng Genocide Museum. This is a very cold and eerie place. More than 17,000 people were killed here at the mercy of Pol Pot and the Khmer Rouge. Upon liberation by Vietnamese forces in 1979, only seven people survived. The building itself used to be a high school and it is situated in a suburban-like neighborhood. As we walked through and looked at all of the photographs, you could hear a bell ringing from an ice cream vendor across the street...it all seemed very strange.

About 10 miles outside of the city center are the infamous Killing Fields. There is a large memorial there that holds over 8,000 human skulls that have been recovered from mass graves in the area. This site was exhumed in 1980 and serves as a reminder of one of the worst acts of genocide in recent history. Today, the fields are very peaceful, full of birds and butterflies. 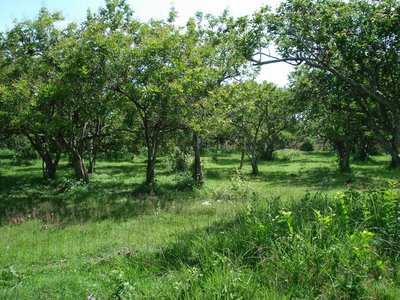 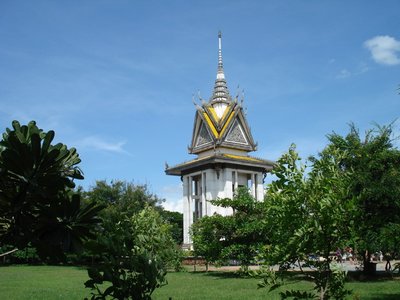 The Cambodian people appear to be moving forward. The country is certainly in better shape today than it was 30 years ago. Tourism is booming and the influx of new investment dollars will hopefully provide better job opportunities. 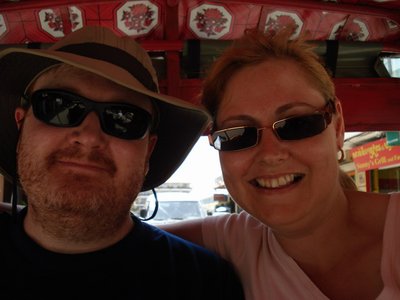