A washed out bridge, a wet camera, and a hotel with no power

They say that trouble comes in threes, and that certainly appears to be the case in our situation.

Leaving the Cayo district was fairly uneventful. It was a very scenic drive through the Maya mountains, past the rain forest and jungle, via the Hummingbird Highway. Luckily, all of the major roads are paved and are reasonably well maintained. However, we ran into a delay just outside the town of Hopkins. The bridge crossing the Sittee River on the Southern Highway leading to Placencia had been washed away a few days earlier by heavy rains. This effectively cut off access to most of the southern part of the country. A construction crew was working on a diversion bridge that was supposed to be finished "sometime" later that day. 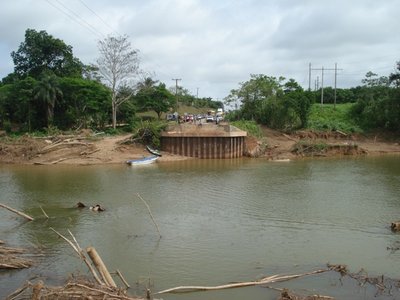 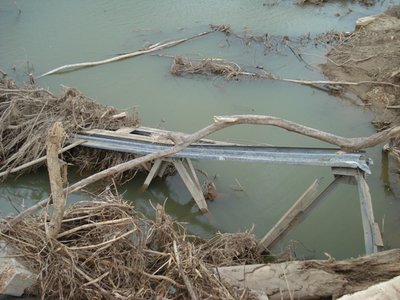 We turned around and spent a few hours visiting the coastal towns of Dangriga and Hopkins. The Garifuna culture is prominent here, and most people living in this area are from Nigerian descent. The roads in these towns are mostly dirt, and full of potholes. The area is currently under heavy development, with grandiose plans for condos, golf courses, harbors, private air strips, etc. We met with one of the developers who took us on an impromptu tour of the area.

We then went back to check on the status of the new "bridge". Both sides of the riverbank were filled with people waiting to cross. Several of the locals decided to abandon their cars and cross by boat. One of the quaint, and sometimes frustrating, traits that Belizeans have inherited from their Caribbean neighbors is a complete lack of urgency. We watched in amusement as the Belizeans, who seem to truly enjoy operating heavy equipment, used their giant CAT bulldozer to move even the smallest of objects. Dozens of workers and soldiers stood around and watched a couple of guys casually working on the bridge. It began to rain, and as we walked back to the car it appears that Ann's camera must have gotten wet. It still takes pictures, but the digital display screen appears to have given up the ghost. 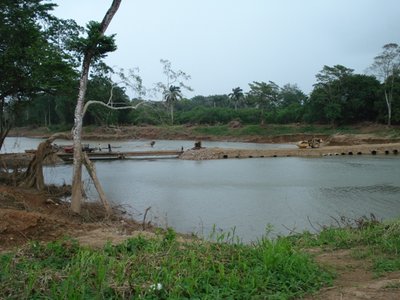 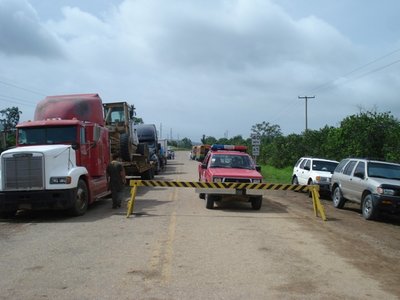 The bridge was finally completed around 7PM. Mass chaos broke out as cars jockeyed for a position in line to cross. The soldiers then made the mistake of releasing traffic simultaneously from both sides. That might be OK in certain situations, but not when you're trying to cross a bridge that can only accommodate one lane of traffic at a time. They eventually got things straightened out and we were back on our way.

Reaching the turn off for the town of Placencia, we realized that we had another 25 miles to go on a very poor dirt road, and it was quickly becoming dark. In general, it's not really a good idea to drive at night in Belize. In complete darkness, we finally arrived at our destination only to find that a transformer had blown up earlier in the day and the hotel was completely out of service. We hit the road again in search of another hotel. We ended up a little bit further along the peninsula at Maya Beach and found a really cute place called Singing Sands. We stayed in a cottage about 50 feet from the ocean. 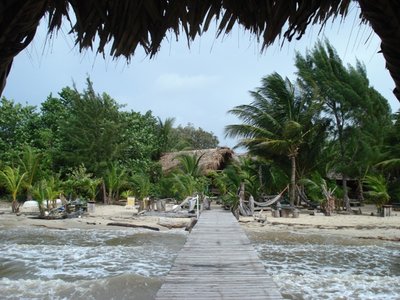 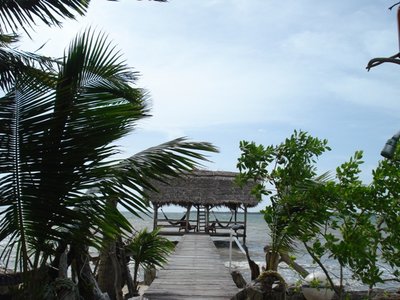 The next day we explored the town of Placencia. It's a small, one road town with a Caribbean look and feel. Most of the buildings are painted in loud, vibrant colors. Unfortunately, due to our delay the previous day, we missed the annual Lobster Festival that was held over the weekend. We relaxed for awhile on the beach, swinging lazily in a couple of hammocks. 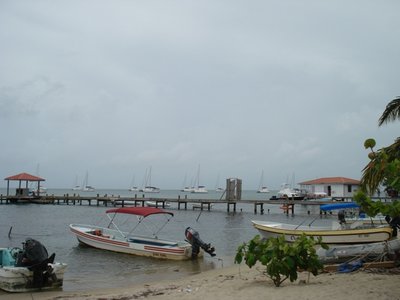 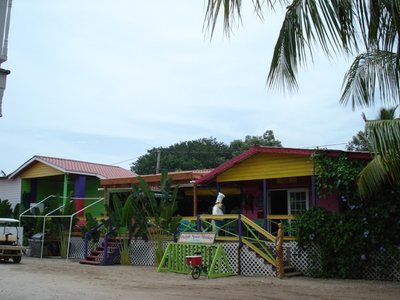 We decided to move on and headed towards the capital city of Belmopan. We stayed overnight in the jungle at a lodge called Banana Bank. It's owned by a friendly cowboy from Montana named John Carr who moved to Belize 30 years ago to start a farming business. Today, in addition to farming corn, the lodge has a few guest rooms and a variety of different wildlife on the property, including monkeys, parrots, and even a jaguar. 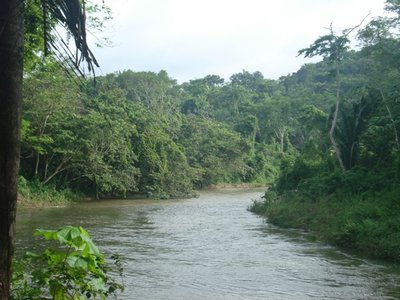 We are now back in Belize City and will (hopefully) be flying back to Phoenix tomorrow afternoon.

Ann is going to visit her family in Canada for a couple of weeks, and then we're headed for Nicaragua, Panama, and Ecuador later this month.